At one of the customers I’m currently working they took the decision to take a look at the spaghetti of security keys. We made a plan of how the new basic security-structure should look like and implemented it. After releasing this new more logical security structure we started to get the message ‘%2 %1 not initialised.‘. 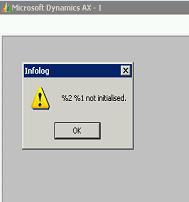 After some research we discovered this issue occurred only with a few user groups and that the message only exists in the KTD-files, so it is kernel related. We checked the AccessRightsList-table for some inconsistencies but no luck. In the end we found a work-around that helped us solving this issue. When we make a export of the security and afterwards we import the export we just made, the issue disappeared by itself. Because there are a lot of user groups that could be infected with this issue, we automated this fix by running the import – export in a job.

© 2019 All Rights Reserved | Powered by Wordpress | Integral theme by Themely